Find this article at:
go.ncsu.edu/readext?511596
— Written By JC Johnson 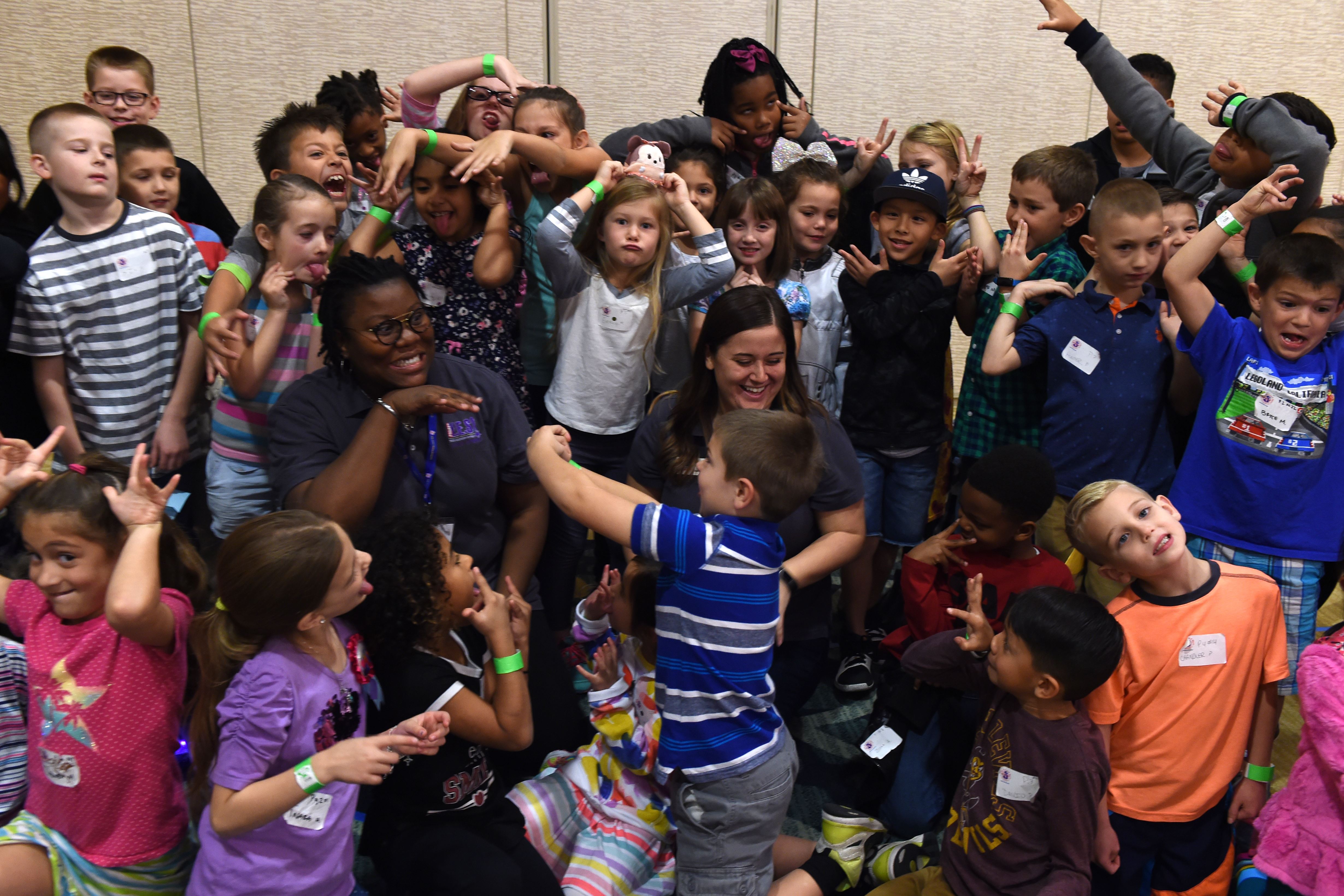 Erica Pullen, Project Youth Extension Service support staff, and Kelsey Roach, Project YES team lead, both center, pose for a photo with children under their care during a Yellow Ribbon Reintegration Program in Orlando, Dec. 16, 2017. Both Pullen and Roach were once military dependents and use their experiences and education to help children of deploying Airmen receive resources to help get them through their parent’s deployment. (U.S. Air Force photo by Tech. Sgt. Benjamin Mota)

ORLANDO, Fla. — The Air Force Reserve Yellow Ribbon Reintegration Program helps service members and their loved ones build a roadmap to success by preparing them for pre- and post-deployment challenges, but what is often overlooked are behind-the-scene service providers who help navigate that plan.

One provider, Project Youth Extension Service, is a Department of Defense national internship program that focuses on needs of children attending Yellow Ribbon events around the country by providing resources before and after a parent’s deployment.

Yellow Ribbon began in 2008 following a congressional mandate for the Department of Defense to assist reservists and National Guard members in maintaining resiliency as they transition between their military and civilian roles.

During Yellow Ribbon events, adults are provided training on education benefits, health care, retirement information and more while children 6 and older are placed in care of Project YES volunteers providing resources tailored to their needs.

Rather than acting like child care providers, volunteers serve as role models and friends, said Erica Pullen, a Project YES support staff who has been with the program for more than five years.

“YES helps address a variety of issues by building trust in a safe atmosphere designed to encourage dialogue in groups containing youth of similar ages,” Pullen said. “Issues adults deal with during and after deployments vary substantially from that of their children.”

At the beginning, participants are usually timid, so staff use activities designed to break the ice, she said. They want children to start developing relationships with others who are experiencing similar things associated with deployments.

As a military child whose parents both retired from the Army, Pullen understands first-hand the difficulties faced from having a deployed parent.

“I understand the entire deployment process and know what it’s like not having any peers who understood what I was going through during it,” she said. “I have a passion for youth development, love to travel and a military background, so when I heard about the program I knew it was perfect for me.”

Roach’s father is a GI and she has attended a variety of teen leadership programs through military organizations since she was a child.

“Without programs like this I wouldn’t have the leadership skills I have today,” Roach said. “I built friendships with people who understood what I was going through, and we continued to support each other even after events were over.”

In addition to helping children, Project YES also provides critical hands-on experience and training needed for staff to enhance their careers after college.

From 2011, when the program was created, it has supported Yellow Ribbon youth events for various service branches and others types of youth venues in 49 states and four U.S territories, helping over 20,000 youths.

“By the end of a Yellow Ribbon event we see participants leaving with leadership skills and confidence we didn’t see when they began,” Pullen said. “They also have more situational awareness and are able to handle issues associated with their parent’s deployment.”